The winger is under fire – for a tattoo of a gun 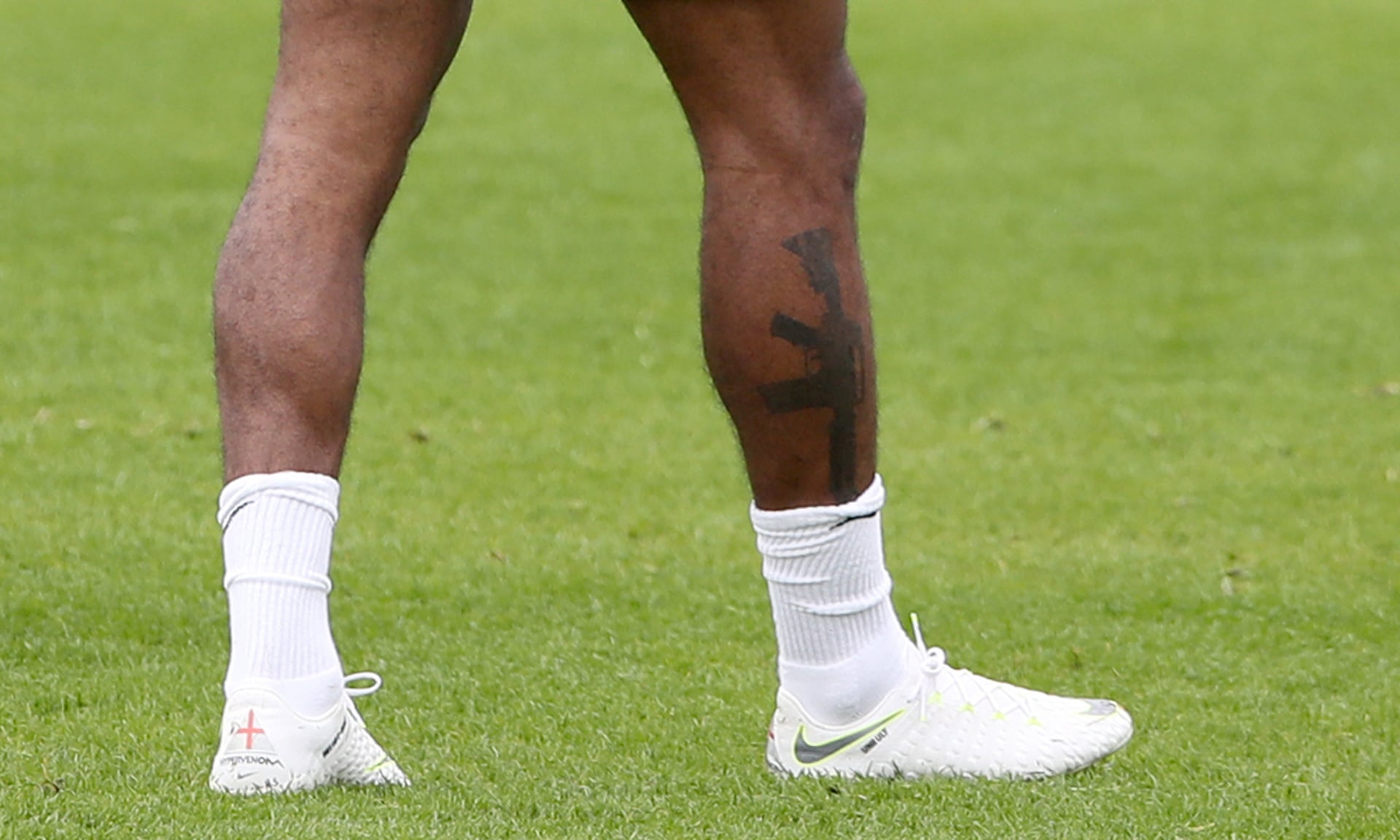 Well thanks very much, instant reactors of the world. Now I’ve got to come to the defence of one the of slimiest, greediest, most loathsome individuals in the world – the Manchester City and London FC winger, Raheem Sterling. Fan-flipping-tastic.

It continues an apparent theme of this site. In recent times, I’ve come to the defence of Ken Livingstone, Diane Abbott, John Bercow and Jeremy Corbyn. Twice. It’s not always fun, but whenever anybody is being unfairly maligned or mistreated, whatever one thinks of them, one should always come to their defence.

So back to Sterling – I am loath to do this, as he is a repulsive, reptilian creature worthy of a career that spirals downwards towards ignominy and an eventual transfer to somewhere awful and humiliating like the Russian Second Division or the Scottish Third Division or Everton. Of course, these feelings of spite and bile are purely because he was a quality player who left Liverpool. I am unashamedly tribal in one aspect of life – football – and I shan’t be changing that. Indeed, if I ever met the guy I’d probably say hello and have a lovely chat. My football emotions aren’t to be taken seriously and I make no comment on the man’s character outside of football. The greedy little sod. Sorry.

So what has been his alleged crime? Mr Sterling posted a picture on Instagram that showed off his new tattoo – an M16 rifle on his lower right calf. This, safe to say, hasn’t gone down too well in this modern age of hand-wringing over guns, particularly big and scary ones, in the media.

When you’re training and realised you ain’t post on the gram in couple days.📸

Now, I’m not going to make any comment on the offensiveness or not of his tattoo. Generally, with some exceptions, I find tattoos to be a bit of an eyesore anyway, but would never dream of telling anyone else what they should or should not have permanently etched onto their flesh. It’s not for me, but knock yourselves out if that’s what you want. Unless it contravenes a known law, you can show it off as much as you so desire.

He has explained its ‘deeper meaning’, which goes along the lines of it being a symbol against gun violence, owing to the fact that his father was himself murdered by a gunman. The positioning of it, on his right foot, symbolises the weapon that he uses to shoot with – not a gun, but his foot. again, think whatever you like about that, but its his decision and his tattoo.

It’s the reaction to it that’s got my back up. The internet will always collapse in convulsive fits of spasmodic rage whenever any sportsperson does anything vaguely controversial, and so that’s barely worth bothering with in terms of a rebuttal. But one particular reaction caught my eye and brought me here to write this defence of Mr Sterling.

A lady by the name of Lucy Cope, who founded Mothers Against Guns following the murder of her own son in 2002, gave the following statement:

“[The tattoo] is totally unacceptable. We demand he has the tattoo lasered off or covered up with a different tattoo. If he refuses, he should be dropped from the England team. He’s supposed to be a role model but chooses to glamorise guns.”

Now, I again make no comment on Ms. Cope, or her organisation. I know little about them. But I want to look at this statement and its purpose, because it seems to me extraordinary – an extreme overreaction with an unfortunate tone.

She is completely entitled to say that the tattoo is unacceptable. I take no issue with that – she can think whatever she likes and say whatever she likes in this regard, it is her opinion. Where she runs into trouble is the next phrase – “We demand…”

Ms. Cope makes a demand of a complete stranger that he either damages his body or hides it in shame. She then sets out the terms of the punishment should he refuse to comply with her demand. Of course, she has no power to enforce any of this, but the mere fact that anyone would use language like this to speak about or to another person about choices they have made speaks to the growing censoriousness that we see almost everywhere.

Could she not have ‘suggested‘ he cover it up? Might she not have ‘encouraged‘ him to think about removing it or changing it? Would not a better approach have been to actually engage him in a dialogue rather than making demands and threats?

I know exactly what I’d think if it were me being attacked. Suffice to say I’d be in no mood for a little chat

I do not wish to call into question the overwhelming emotion that such a person must feel, particularly given the tragic circumstances of her family. I’m sure I might feel exactly the same way in her situation. I also do not question her motive or intent. But this was a public statement made to a national newspaper. This kind of language does not start a healthy conversation, and I know exactly what I’d think if it were me being attacked. Suffice to say I’d be in no mood for a little chat.

It’s why I continue to implore everyone to take a step back and speak with a calm, measured tone. Take the time to think before reacting. It makes for a much calmer and less angry society, one in which we might actually be able to talk to one another rather than shout and make demands of one another. In this case, Raheem Sterling doesn’t need to answer to anyone unless he chooses to do so.